Success.
Sandra reportedly earned $15 million for 2002's Murder By Numbers, which definitely places her among Hollywood's A-list, salary-wise. In fact, in 2007 Forbes ranked her as the 14th richest female celebrity with an estimated fortune of $85 million. Jesse makes his money as CEO of motorcycle company West Coast Choppers and, of course, from television spots on Motorcycle Mania and Celebrity Apprentice. 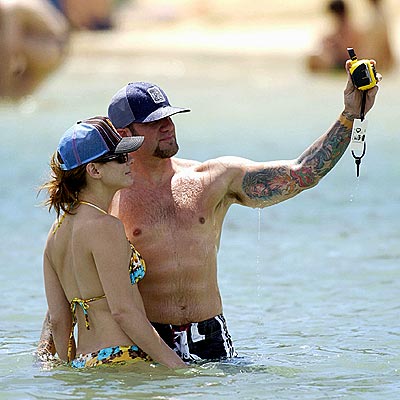 Attractiveness.
Bullock's easily good looking enough to land her roles as a leading lady, and her aesthetic is much more natural than many of the stars on our list. Whether you're into the biker thing or not, Jesse is pretty average-looking (but kudos on the buff build).

Popularity.
Sandra was the subject of some 450,000 Google searches last month, and Jesse scored around a million. Whether Google users were looking for the deceased outlaw played by Brad Pitt or not, the numbers push this couple high on our popularity list.

Staying Power.
This couple has been married since 2005, but their romantic histories are rich indeed. Sandra's dated Tate Donovan, Matthew McConaughey and Ryan Gosling, while Jesse's been married twice before (once to a Penthouse model!) Sandra's a devoted stepmom to James's kids, but they don't have any children of their own.


Compatibility.
Astrologically, these two are bound for happiness. Sandra's Leo sign gels with Jesse's Aries one, since they're both adventurous, emotional and affectionate. A motorcycle man with a soft side -- Nicholas Sparks's wheels are turning as we write.