(Getty Images)more pics »
Success.
Bowie has been working steadily since his heyday in the '60s and '70s, and a few years ago his wealth was estimated to be around $287 million. He's won a Grammy Lifetime Achievement Award, in addition to Webby Award for pushing boundaries in 2007 -- basically, the man is an icon. Iman is no less accomplished, having begun her modeling career with Vogue and walked for Yves Saint Laurent. She also gains proceeds from her signature line, IMAN Global Chic. (Getty Images)more pics »
Attractiveness.
Iman epitomizes the word "stunning." She's tall and statuesque, with flawless skin and lovely features -- definitely deserving of her spot on Zimbio's list of the 50 Sexiest Women Over 50. Bowie isn't classically handsome, but his rock star style and attention to his appearance have kept him suave into his 60s. It's no coincidence he's in the top five on our list of the 100 Most Influential People in Fashion. (Getty Images)more pics »Popularity.
Last month, about a million people searched Google for Bowie and 246,000 Iman, placing them in the top third of our most popular couples. 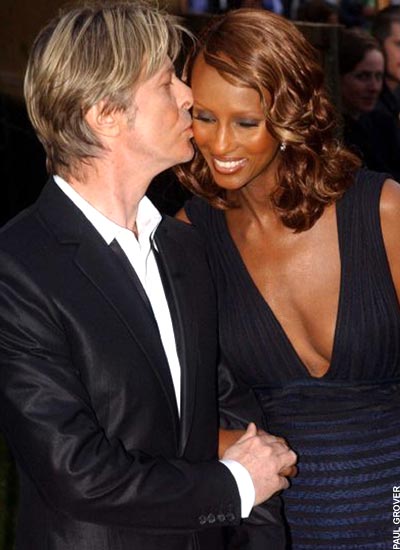 Staying Power.
These two have been married since 1992 and have an eight-year-old daughter named Lexi. Though they've both been divorced once before, the relationships were long-lasting -- so you couldn't exactly accuse these two of serial Hollywood dating. Better yet, we'll let Iman describe their relationship herself:


Compatibility.
Iman is a Leo, and David's a Capricorn, so her adventurous nature might start to feel stifled by his predictable one. Bowie's innovating and making music and becoming a legend is just SO boring, right? 100 Hottest Celebrity Couples of 2010
David Bowie & Iman
There's not much new going on with this duo in the past year, but what else could they possibly want? Bowie is a... more »
View Special »

The Most and Least Successful Models Turned Actresses
Iman
Model Iman remains one of the most successful models of all time, having played muse to Gianni Versace, Calvin Klein... more »
View Special »