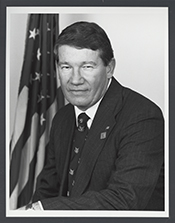 The Republican politcian resigned July 14 of that year, upon admitting that he had sold his vote and his influence to defense contractors for millions in bribes and gifts. Among the various gifts were a Rolls Royce, a yacht he dubbed the "Duke Stir," and, allegedly, meetings with several prostitutes in the Watergate hotel.

Defense contractor Mitchell Wade received tens of millions in defense contracts in the course of his working relationship with the former congressman. After Wade came to the attention of authorities, he told investigators that San Diego businessman Brent Wilkes had been providing prostitutes for congressmen he wanted to bribe. From 1990 to the early 2000s, Wilkes used Shirlington Limousine and Transportation to transport such congressmen to the Watergate hotel, where they would allegedly rendevous with the ladies of the night.

Though Cunningham has been implied in the prostitution allegations, and he admitted that he was bribed, he never copped to using prostitutes.

On March 3, 2006, Cunningham was sentenced to 8 years, 4 months in prison. US District Judge Larry Burns declined to deliver the maximum sentence because at the time of sentencing, Cunningham, suffering from pancreatic cancer, was already 90 pounds lighter than when he was first accused of corruption.

JJ Duncan
I write about movies for Zimbio.com, which means I spend way too much time thinking about the geekiest possible ways to approach the cineplex. I'm also hopelessly addicted to audio books. Follow me: Google
PREV NEXT
Cunningham Pictures
Related People
Comments
Featured Stories