Colin Farrell and Dessarae Bradford on the Tonight Show

By Staff Account on
. . .
Last July, during a taping of The Tonight Show With Jay Leno, Farrell made some comments about a woman who approached him on stage.  He said she was his first "stalker".

Back last summer, an audience member had this to say about it.: "She said something to Colin Farrell that no one heard, then he took her by the elbow, led her off stage, asked the cameramen to turn off their cameras and asked for security."

The woman's name was Dessarae Bradford.  What ever happened to this story?  I haven't seen any additional info, and it's been a long time.  She had threatened to sue Farrell and was over-heard saying that she'd "see him in court".

Was she just a looney? 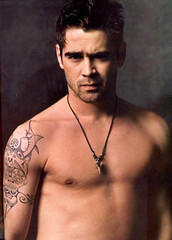 Staff Account
Hi there, we're the Zimbio staff. Just a few folks in one room, drinking lots of coffee and developing Zimbio. Drop us a line, we'd love to hear your feedback and suggestions for Zimbio.
PREV NEXT
Colin Farrell Pictures and Style
Related People
Comments
Featured Stories