While drinking with friends on the the beach 'American Idol' finalist Adam Lambert becomes angry to the point of violence at a photographer, and attacks the man. After being dragged off by a friend, Lambert continues his day of relaxation. (Bauer Griffin)more pics »It's no secret that celebrities hate paparazzi, and really, why shouldn't they? They're always in their face, they camp outside their homes and they follow them everywhere. Paparazzi pretty much ensure that celebrities will never lead private, normal lives.

So, it' s not really a surprise when celebrities lash out and take their agression out on a seemingly defenseless member of the camera carting crew. Still, there have been a few celebrities that have crossed the line. Whether attacks were justified or not, that's for you to decide. Most of these attacks were taken to court, and in all cases the celebrities walked without charges.

Here's a list of the 10 best examples of why celebrities and paparazzi just don't mix.

When Diaz and Timberlake dated they were a couple to be feared, at least by the paparazzi. Both stars seem to have a quick temper around the constant swarm of photographers that follow them, but in 2004, they may have taken it a little too far. Diaz grabbed a hold of a pap's camera, and ran away with it. She might have gotten away with it, except for the fact that other photogs snapped shots of her thieving ways.
Image Source Cynical-C


9. Avril Lavigne
For Avril Lavigne it's not a single attack that gets her on this list, but instead a disgusting habit that she has, involving her hatred towards the paparazzi. The tiny punk singer has a tendency to spit on the paparazzi when she's fed up with them. Yup, the habit is not only un-lady like, but unsanitary and just really really gross. Chris Martin is sneaky when it comes to his paparazzi attacks. During a trip to Australia in 2003 the Coldplay front man waited until a photog following him took a break, Martin than smashed his car's windshield and slashed his tires. Martin was arrested, but, surprise surprise, the charges were dropped.
Image Source Getty


7. Woody Harrelson
In 2006 actor Woody Harrelson attacked a paparazzi from TMZ, and became so enraged that he actually strangled the photographer, and destroyed his camera. Charges were pressed, but the LAPD took Harrelson's side.
Image Source TMZ

It was a fine day in Malibu, Calif., and Matthew McConaughey was enjoying riding some waves. Some Malibu locals were a little angry to find photographers on their local beach, bugging their pal Matthew, so they took matters into their own hand, picking a fight with the photogs. In the end, a camera was smashed and one photog was injured.
Image Source Getty


5. Hugh Grant
Some celebrities use their fists to fight off paparazzi, other their car and still some just grab their cameras and throw them, but not Hugh Grant. No, the English actor apparently enjoys throwing tubs of baked beans and paparazzi that bother him. Grant allegedly attacked a photog in 2006, by throwing a tub of baked beans at him. The photographer walked away bruised, embarrassed and soaked in baked beans.
Image Source INF 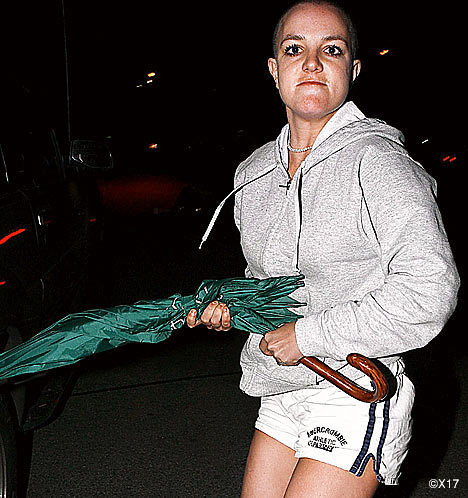 So, Britney Spears has had her fair share of run-ins with the paparazzi, hell, she even dated one. But, in 200, a bald headed Spears viciously attacked an SUV and some members of the paparazzi, while making one of the scariest faces I've ever seen.
Image Source X17


3. Kanye West
Recently, Kanye West attempted to board a plane from LAX, but, he just couldn't go without first attacking a member of the paparazzi. One photographer in particular suffered from the unprovoked attack. West rushed towards the photorapher, stole his camera, then smashed it to the ground. West was arrested, and will appear in court in October.

2. Bjork:
Singer Bjork also had an interesteing paparazzi experience in an airport. After landing in New Zealand with her daughter in tow, Bjork, for no reason, lashed out on a journalist. Last time I checked, welcoming someone to your country did not warrent a full-blow attack involving excessive scratching and clawing. Sean Penn is the king of paparazzi attacks, all because of one altercation in a hotel room. In 1986 the actor was in China shotting Shanghai Surprise, when he got back to his hotel room one night and found a paparazzo waiting for him. Obviously angry, he grabbed the photographer and dangled him from the ninth-floor balcony by his ankles. He was arrested, and charged with attempted murder, but Penn broke out and escaped the country by jet. He was later pardoned. Crazy, huh?
Image Source Getty

Raging Celebrities
What happens when celebrities quit being polite and start getting real?

Best of Paparazzi Girls
Here are the women who keep the paparazzi machine humming.

Tatiana Guertin
A happily married woman. The owner of the cutest dog ever. A journalism graduate. A girl who just loves sports and beer, preferably at the same time.
Avril Lavigne Pictures and Style
Related People
Comments
Featured Stories