The Earth is Eating Texas 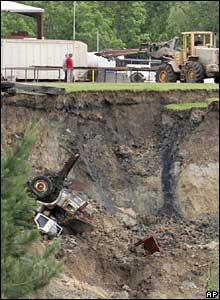 Well, kind of. In the small town of Daisetta, Texas, an already large sinkhole is slowly growing, and believed to be at least 600 feet long and 150 feet deep.

Since Wednesday, the sinkhole has already swallowed up oil field equipment and some vehicles. There are currently no reports of injuries or home damage, but the hole is still growing.

The Daisetta Police Department has shut down roads to the area, and they're hoping it will stop growing. But who knows if that will ever happen? 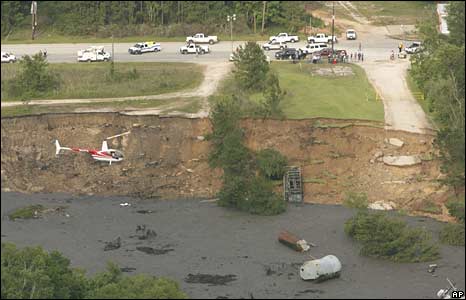 The town's history as a once-booming oil town, may be to blame for the current problem. Still, officials aren't sure what could've caused the sinkhole.

Another possible culprit could be the collapse of an old salt dome, where oil brine and natural gas are stored underground. Salt domes are common oil traps, and Daisetta sits right on top of one.

But, we have a few ideas of our own. Maybe the Earth was just really hungry, and it decided Texas was the tastiest state.

Tatiana Guertin
A happily married woman. The owner of the cutest dog ever. A journalism graduate. A girl who just loves sports and beer, preferably at the same time.
Comments
Featured Stories